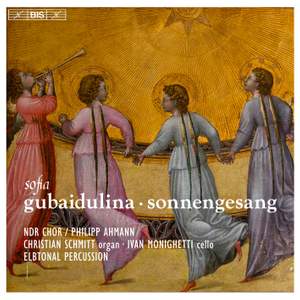 Starting with an ever-circling plainchant-like idea, all the voices of the excellent NDR Chor soon pool into a sonorous cloud out of which solo voices spin, punctuated with baleful comments from... — BBC Music Magazine, March 2017, More…

Gubaidulina: The Canticle of the Sun

A profoundly spiritual composer, Sofia Gubaidulina has said that: ‘True art for me is always religious, it will always involve collaborating with God’. As the present disc demonstrates, it is therefore less than fruitful to try to divide her music into sacred and secular compositions. Jauchzt vor Gott, the opening work, is here being released on disc for the first time. The nine-minute piece for choir and organ sets three verses from Psalm 66, and opens with a long a cappella section on the word jauchzt, ‘rejoice’. At this point, the organ enters with an extensive solo involving a massive dynamic intensification, after which choir and organ continue together in music which makes the concept of contrast a determining element.

As the title signals, the organ work Hell und dunkel (‘Light and Darkness’) also explores contrasts, especially in terms of colour and brightness. Composed in 1976, the work is the earliest on this disc, and it is followed by the large-scale Sonnengesang, written some twenty years later and dedicated to Mstislav Rostropovich. The choir sings the words of St Francis of Assisi’s celebrated ‘Canticle of the Sun’, but it is the solo cello that is responsible for interpreting the meaning of the text. The all-important solo part is here performed by Ivan Monighetti, in dialogue with the eminent NDR Chor of the North German Radio, and with the support of two percussionists from Elbtonal Percussion. Philipp Ahmann conducts this work as well as Jauchzt vor Gott, with Christian Schmitt performing the organ parts.

Starting with an ever-circling plainchant-like idea, all the voices of the excellent NDR Chor soon pool into a sonorous cloud out of which solo voices spin, punctuated with baleful comments from the organ – a particularly impressive-sounding instrument in SACD sound

One could hardly wish for a better soloist than Ivan Monighetti.

A fine addition to the Gubaidulina discography, though there are other worthy accounts of the Canticle of the Sun to consider.