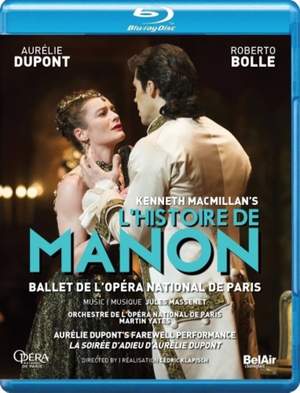 The film of L’Histoire de Manon, reproduced on this Blu-ray, was directed by Cédric Klapisch and co-directed by Miguel Octave on 18 May 2015. This exceptional evening marked the farewell of Aurélie Dupont as prima ballerina of the Paris Opéra Ballet.

In 1974, British choreographer Kenneth MacMillan in turn decided to focus on the two protagonists for an ambitious ballet that could translate the feelings and emotions of two souls abused by the accidents of life and their own personal weaknesses. In short, how a young girl on her way to a convent manages to elope with the young student with whom she has just fallen in love, only to leave him to escape destitution and finally allow herself to be persuaded by her brother Lescaut to yield to the advances of wealthy “protectors”. Accused of prostitution and deported to Louisiana, Manon is rescued by Des Grieux. Driven to murder by Manon’s jailer, he escapes with her into the marshes where the young girl ultimately succumbs. Although sincere, the love that Manon and Des Grieux share for each other cannot stand up to the vagaries of existence. As a result, neither is able to escape moral or social decline. Rather than reuse the score of Massenet’s opera, MacMillan entrusted Leighton Lucas with the task of arranging a series of extracts taken from a selection of the French composer’s operatic, symphonic and vocal scores... The end result was a huge success from its debut performance in London in 1974 onwards.