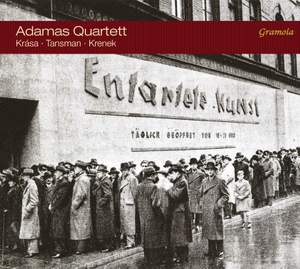 A great concern for the Austrian Adamas Quartet has always been the treatment of composers whose works were termed ‘degenerate’ and banned during the Nazi regime or who themselves became victims of the barbaric extermination machinery. On their second album, the critically acclaimed ensemble devotes itself to the String Quartet (1921) by the Czech composer Hans Krása, a work showing an astounding compositional maturity – despite being only his second published piece. In contrast to Krása, who was later murdered in Auschwitz, Alexandre Tansman was able to emigrate to the US in 1940, ten years after composing Triptyque for string quartet. Ernst Krenek, later as well being forced to migrate, also published his Neoromantic-oriented String Quartet no.5, op.65, in the year 1930. -

Music I’m delighted to have become acquainted with.