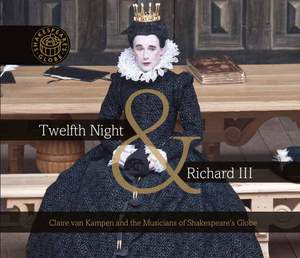 Music from The Globe's Landmark Productions

It is no ordinary Broadway pit band...introducing works in an unstuffy way to audiences who may be unfamiliar with the great thrills of early music. — New York Times

Book of Songs, Book 1: Can She Excuse My Wrongs (arr. C. van Kampen for chamber ensemble)

Twelfth Night: The Wind and the Rain

The Battell: VI. The Bagpipe and the Drone (arr. C. van Kampen for bagpipe)

Globe Music is a new record label from Shakespeare's Globe celebrating special projects, concerts and performances. Recordings capture the intimacy of our candlelit concerts in the oaken Sam Wanamaker Playhouse, while creating an international platform for the finest live music created at the Globe.

This second release celebrates the 400th anniversary of Shakespeare's death by recording the music from these two legendary and Tony and Olivier award-winning productions that enjoyed sold-out runs on Broadway, the West End, in the cinema and at the Globe. Featuring Mark Rylance and Stephen Fry, many credit Twelfth Night as the finest production of Shakespeare in a generation.

Performing music that Shakespeare would recognise on a wide array of rare historical instruments, The Musicians of Shakespeare's Globe perform over two dozen short masterworks from the period that featured so prominently in these productions. Much of the Twelfth Night music is recorded straight from the Globe and remastered for this release. The Richard III score is recorded with the exquisitely fine acoustic detail that has made the Wanamaker Playhouse a haven for chamber music everywhere.

It is no ordinary Broadway pit band...introducing works in an unstuffy way to audiences who may be unfamiliar with the great thrills of early music.