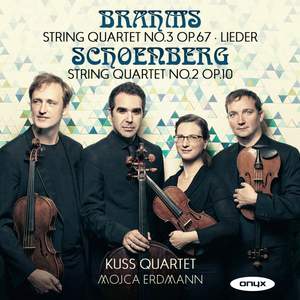 The Kuss Quartet’s fourth ONYX album is a programme of Brahms and Schoenberg, and they are joined by the German soprano Mojca Erdmann in three Brahms Lieder, and the 2nd of Schoenberg’s four string quartets.

After composing his First Chamber Symphony Op.9 in 1907, Schoenberg wrote "Now I have established my style I know now how I have to compose" However his next work showed a great deviation in style, and tonality is tenuous is the extreme – Schoenberg bids tonality farewell in this extraordinary composition. Setting Stefan George’s poems ‘Litanei’ and ‘Entrücking’, the 2nd Quartet caused a scandal. At the first performance "all hell broke loose" wrote the composer "'Stop it! Stop it! We have had enough!' shouted a well known critic. It was then that people forgot their drawing room manners. Part of the audience joined in the riot …not much of the music penetrated the noise" Brahms’s intense concentrated musical thinking heavily influenced Schoenberg. Like the younger composer however, Brahms was very much "a natural continuer of properly understood good old tradition" (Schoenberg’s words describing his own music) and his 3rd Quartet harks back to the classicism of Mozart, especially the ‘Hunt’ Quartet, also in B flat major.

The Kuss Quartet artfully exploits its disruptive mischief and innate asymmetry … Wit lights up this account, every joke perfectly timed, every nuance explored … Mojca Erdmann…is in her element for three Brahms songs, sung with touching simplicity and radiant focus.

[The Kuss] impart to the [Schoenberg] a persuasive sense of the composer wrestling with his material, struggling to bend it into Brahmsian shames until the music pulls him where he dared not go. Mojca Erdmann is on commanding form and well placed within the body of the quartet as a fifth voice…an ensemble to pay attention to

The players bring enormous finesse to this music, which can change in a moment from cobwebby, dreamlike sounds to an almost orchestral depth and richness. Soprano Mojca Erdmann is best known for singing Mozart, and some might find her too light voiced for Brahms. But her exquisite pearly sound is just right for Schoenberg’s tranced intensity.