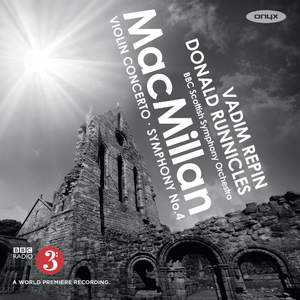 Two major works from Sir James Macmillan make their CD debut! The Violin Concerto is performed on this disc by its dedicatee Vadim Repin.

Reviewing the world premiere, David Nice of The Arts Desk lauded, "As soloist Vadim Repin and conductor Valery Gergiev whirled us tumultuously through its hyperactive songs and dances, there was so much I wanted to savour, to hear again. That won't be a problem. So long as there are violinists of Repin's calibre able to play it, the work is here to stay."

The 4th Symphony is dedicated to Donald Runnicles and was written to celebrate his 60th birthday. Sir James MacMillan is one of today’s most successful composers. His musical language is flooded with influences from his Scottish heritage, Catholic faith, social conscience and close connection with Celtic folk music, blended with influences from Far Eastern, Scandinavian and Eastern European music.

The 4th Symphony recording is from the 2015 BBC Proms and was the world premiere performance "Densely, at times exotically scored, it was grandly played. Runnicles conducted it with great affection and dignity" Tim Ashley, The Guardian

Donald Runnicles and his BBC forces navigate the arresting work’s excitement and beauties with fearless panache.

That the symphony conveys the eloquence that it does is in no small part down to the conviction of Donald Runnicles, who draws a committed response from the BBC Scottish Symphony. Vadim Repin is also admirable in the solo part of the concerto, which could well find itself a place in the modern repertoire. Immediate sound and insightful notes by the composer enhance a significant release

Repin has made this concerto his own on the live circuit, and here turns in another virtuosic performance with Donald Runnicles and the BBC SSO, also on top form. In his Symphony No 4, MacMillan claims to present a more abstract musical statement. Yet I find it impossible not to feel embraced by its strength of personality and expression, much of it arising from the ghostly references to Robert Carver’s music.

There is a frisson in the fact that it is live, but it is also easy to hear why re-recording was rejected as an option because the playing, across every section of the orchestra, is of such energy and commitment that replicating it would have been a tall order.

Rarely has a CD of new music engaged me quite as much as this one has … The superb performances are extremely well recorded. I predict an award somewhere along the line.