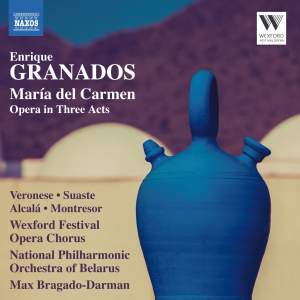 María del Carmen was Enrique Granados’s first great operatic success and the stage work he held in highest regard. It was received with great acclaim at its première in 1898, admired for its refined and brilliant orchestral writing and for its profound lyricism. Using the folklore, language and sounds of Murcia in south-eastern Spain alongside the influence of Wagnerian thematic techniques, the opera is set in a rural village where a water shortage and a love triangle inflame the mutual hatred between the peasant farmer Pencho and his wealthy rival Javier.