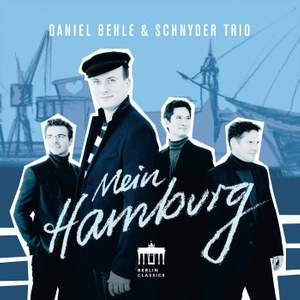 Daniel Behle is one of the most versatile German tenors and is equally successful in the concert, lied and opera genres. His extensive repertoire ranges from Baroque masterpieces to Classical and Romantic works to compositions of the 20th and 21st centuries.

In April 2014 he made his acclaimed debut Matteo in Strauss’s “Arabella” at the Salzburg Easter Festival under Christian Thielemann. In 2015 he returned to Aix‐en‐Provence as Belmonte (“Die Entführung aus dem Serail”) and sang his first Wagner role: Erik in “Der fliegende Holländer” at the Frankfurt Opera. In September 2016 Daniel Behle made his debut at the Royal Opera House Covent Garden, performing Ferrando in “Così fan tutte”.

The artist has also made a name for himself as a composer. He premiered his Ringelnatz cycle at the Beethoven House Bonn in 2013. A milestone in his composing career is his arrangement of Schubert’s Winterreise for tenor and piano trio (Sony Classical). Following the UK premiere at the Wigmore Hall and the Germany premiere at the WDR Cologne, he will perform the Netherlands premiere at the Concertgebouw Amsterdam in January 2017.

Daniel Behle was nominated for a Grammy Award in 2014 for the recording of Leonardo Vinci’s Artaserse. His lieder recordings and solo CDs, including Die schöne Müllerin, Dichterliebe, Strauss songs and Bach arias, have been praised by critics. His debut album for Decca (Gluck arias with Armonia Atenea) was released in 2014.