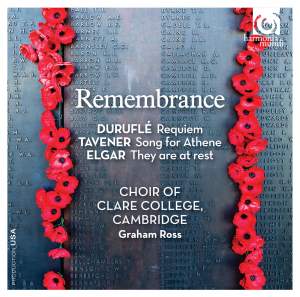 Ramsey, R: How are the mighty fallen

David talks to the musical director of Clare College choir about his new disc of Remembrance-themed choral works.

Graham Ross directs the Choir of Clare College, Cambridge in a wide-ranging and moving sequence of music for Remembrance, including John Tavener’s “Song for Athene”, settings of the text “When David heard of the death of Absolom “ by two of England’s foremost 16th-century composers, Thomas Tomkins and Thomas Weelkes, and featuring Durufle’s 1948 setting of the Requiem Mass.

Founded in 1971, the Choir of Clare College has gained an international reputation as one of the leading university choral groups in the world. Beyond its primary function of leading services three times a week in the College Chapel in Cambridge, the Choir maintains an active schedule recording, broadcasting and performing worldwide.

In addition to live performances the Choir has produced an impressive discography: their partnership with harmonia mundi includes recordings of Handel’s 'Messiah', Blow’s 'Venus and Adonis', with René Jacobs, world première recordings of choral works by Imogen Holst, and most recently a series based on the major festivals in the Anglican calendar, produced, engineered and edited by John Rutter and accompanied by excellent booklet notes by Graham Ross.

This is a beautifully programmed and performed disc…Graham Ross takes a full-on approach, with tempos brisk and passions raised – mezzo Jennifer Johnson’s ‘Pie Jesu’ is, in particular, an emotional tour de force…of recordings of the choir and organ version of Duruflé’s Requiem, I’ve heard none better. This, though, is just the crowning point of an engaging and thought-provoking recital

It’s as satisfying a performance of this increasingly popular requiem as you are likely to find … Ross’s programme includes familiar items by Farrant, Tomkins and Weelkes, as well as a truly gorgeous account of Harris’s Bring Us, O Good Lord, relaxed yet finely shaped.

In the ideal ambience of Lincoln Cathedral, Ross and the Choir of Clare College, Cambridge, rise to a high-class performance that breathes an elevated air of Gallic sensuality and measured grandeur.

Graham Ross and his choir make something rather special of the 1948 scoring…choral unisons ring with warmth, sopranos maintain absolute evenness from top to bottom of their register, and chords decay to reveal a perfect pyramid of sound, firmly rooted on some excellent basses. Neal Davies is a luxurious casting for the cameo bass solo, while Jennifer Johnston’s Pie Jesu is a model of emotive austerity, keeping vibrato to a minimum and letting Duruflé’s melody do the work

The choir sings extremely well throughout … This very fine account of the Duruflé Requiem sets the seal on a thoughtfully conceived and expertly performed programme. The Clare College choir is among the finest of the UK’s collegiate choirs and this new release is fully up to the standards we’ve come to expect from them.

the magnificent Father Willis Organ … is played to magnificent effect by Matthew Jorysz, reminding me why I sometimes end up preferring Durfule’s organ only version of the Requiem … it’s interesting hearing the Clare College Choir after King’s [College Choir, Cambridge], the focus and security of the sopranos especially...altogether an excellent account.