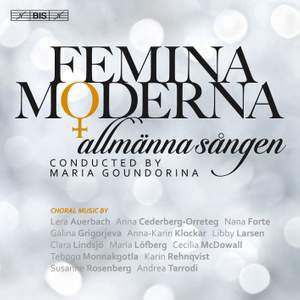 The choir’s sound is fresh and direct. Its ensemble is tight and its diction crisp — BBC Music Magazine, January 2017, 3 out of 5 stars More…

I. Song for a Dance

II. Pluck the fruit and taste the pleasure

Allmänna Sången began its existence as a male-voice choir affiliated to the University of Uppsala in 1830, but was reformed as a mixed choir in 1963. Ever since, the choir has expanded its repertoire and stylistic range, often surprising audiences with its unconventional approach to familiar works and with collaborations across genres. Previous releases on BIS bear this out, for instance Carl Orff's Carmina Burana in a rarely recorded chamber version, or Resonances – a programme of Swedish choral classics, contemporary works and folk music, in which the choir engages with the jazz pianist Anders Widmark.

On Femina moderna the choir and its conductor, Maria Goundorina, present a programme of contemporary works by Swedish and international women composers; no less than ten of the thirteen works included were written in 2000 or later. Most recent is Anna-Karin Klockar's Speeches which in 2016 won first prize in a competition for women composers arranged by the choir. The competition, the Allmänna Sången & Anders Wall Composition Award, was first held in 2014 in celebration of the choir's 50th anniversary as a mixed choir, and the winning work on that occasion, Sandskrift by Maria Löfberg, is also included on this disc, along with pieces by composers such as Lera Auerbach and Libby Larsen (U.S.A.), Cecilia McDowall (UK), Galina Grigorjeva (Estonia) and Nana Forte (Slovenia).

The choir’s sound is fresh and direct. Its ensemble is tight and its diction crisp

The choir, very fine but without the last levels of technical excellence that some of their professional Nordic neighbours offer…rise to the [pieces] impressively