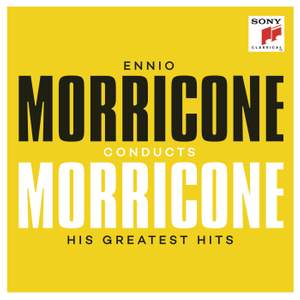 Morricone, E: Investigation of a Citizen Above Suspicion

Morricone, E: Once Upon A Time In The West: Jill's Theme

Morricone, E: A Fistful of Dynamite

Morricone, E: The Good, the Bad and the Ugly: The Ectasy of Gold

Morricone, E: A Brisa Do Coração (From 'Pereira Declares')

Morricone, E: On Earth as it is in Heaven (from The Mission)

Sony Classical presents “Ennio Morricone conducts Morricone – His Greatest Hits”, celebrating Morricone’s 60 years of music making in October. The album features his most popular movie themes, selected and conducted by Morricone himself. It contains music from films including "Once Upon a Time in the West", "Cinema Paradiso", "The Good The Bad And The Ugly", "The Mission". In 2016 and 2017 Morricone will present parts of this repertoire internationally on his "The 60 Years of Music Tour".