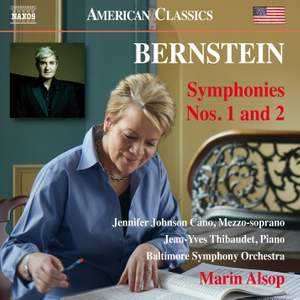 The performances are predictably excellent. In No. 1, the imposing first movement is presented with fervour, and the Copland-like central scherzo with lightness and precision; Jennifer Johnson... — BBC Music Magazine, March 2017, 4 out of 5 stars More…

Part I: The Seven Ages: Variation 5

Leonard Bernstein’s legendary 1943 Carnegie Hall conducting début brought his name to national attention, and the event was followed a few months later by the triumphant reception of his Symphony No. 1 ‘Jeremiah.’ This major symphonic statement explores a crisis in faith and employs Jewish liturgical sources, its final movement, Lamentation, being an anguished cry at the destruction of Jerusalem. Sharing the theme of loss of faith, Symphony No. 2 ‘The Age of Anxiety’ takes W.H. Auden’s poem of the same name and follows its four characters in their spiritual journey to hard-won triumph. Bernstein’s Symphony No. 3 ‘Kaddish’ can be heard on Naxos 8559742.

The performances are predictably excellent. In No. 1, the imposing first movement is presented with fervour, and the Copland-like central scherzo with lightness and precision; Jennifer Johnson Cano brings sustained intensity to the finale. In No. 2, the orchestra and Jean-Yves Thibaudet negotiate the two opening chains of variations with wide-ranging characterisation

We all know that Alsop is a superb Bernstein conductor…in the central Profanation movement, Alsop really does outdo Bernstein himself; the playing of the Baltimore Symphony here is sensational, and in the finale Jennifer Johnson Cano sings with great sensitivity and a beautiful tone. The tragic climaxes hit you right in the gut…a marvellous release by any standard.