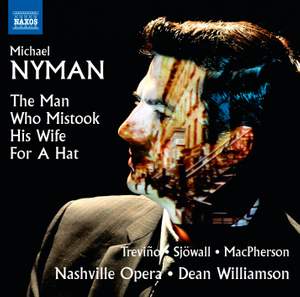 Offer, Nyman: The Man Who Mistook His Wife for a Hat

Nyman: The Man Who Mistook His Wife for a Hat

Scene 3: The Solids: But what of the parietal regions (Neurologist, Mrs. P, Dr. P)

Scene 6: The Prescription: The Wife: Tell me, how does he manage? (Neurologist, Mrs. P, Dr. P)

Scene 7: Epilogue: The Prognosis: I cannot tell you what is wrong (Neurologist, Mrs. P, Dr. P)

Michael Nyman’s one-act chamber opera The Man Who Mistook His Wife for a Hat takes as its subject Dr P, a man suffering from visual agnosia, or ‘mental blindness’, and is adapted from the neurological study in the book of the same name by Oliver Sacks. For Nyman, Dr P ‘requires music as a lifeline, cue, clue, cure’, living as he does in a world lacking visual meaning. It is through his musical gifts that Dr P reclaims meaning from chaos, Nyman’s tautly conceived masterpiece providing a perfect medium through which the moving drama can be explored.

Dean Williamson has a versatile career in standard and contemporary repertoire, and is earning worldwide acclaim for his perceptive and commanding conducting. He currently serves as Music Director of Nashville Opera where select conducting credits include Hydrogen Jukebox, Florencia en el Amazonas, The Difficulty of Crossing a Field, and Michael Nyman’s The Man Who Mistook His Wife for a Hat. The production of Le Comte Ory he conducted at Des Moines Metro Opera was nominated for an Emmy Award.

A valuable and satisfying addition to the catalogue restoring this celebrated Nyman opera to general availability.

It’s…rich in elegant melody, catchy ‘hooks’ and crisp rhythms…With great attentiveness and sensitivity, the music simultaneously sculpts the flow of the drama and maps its rapidly changing emotions, describing as it does so a compelling dramatic arc, its climatic moments judiciously placed.

His mellifluous bass at once robust and gentle, Matthew Treviño is aconvincing patient. Ryan MacPherson is the neurologist, a tenor role to which he brings an intense lyrical expressivity. Rebecca Sjöwall…manages the high soprano tessitura with apparent ease and convincingly articulates her character's rising distress.