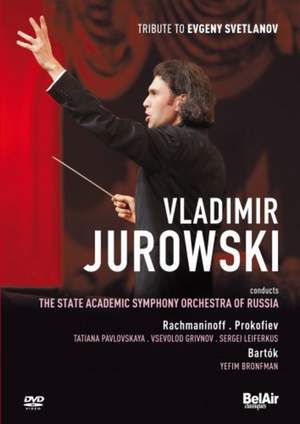 Apart from its virtues as a brilliant piece of programming…this concert should be snapped up by Prokofiev lovers. It’s been a long time since we’ve had an electric performance of his seismic... — BBC Music Magazine, March 2017, 4 out of 5 stars More…

Celebrating the 85th anniversary of the birth of the great Russian conductor Evgeny Svetlanov (1928-2002), this event was filmed in the magnificent room of the Moscow Tchaikovsky Conservatory. Evgeny Svetlanov spent 35 years leading the Symphony Orchestra of the Russian Federation, today nicknamed ‘The Svetlanov’.

Conducted by Vladimir Jurowski, its new director, the concert gathers some of the most acclaimed artists: Yefim Bronfman, Tatiana Pavlovskaya, Vsevolod Grivnov and Sergei Leiferkus.

The programme is a selection of great pieces by Prokofiev, Bartók and Rachmaninov, among them The Bells.

Evgeny Svetlanov began and ended his career with one of his favourite works, Rachmaninov’s choral symphony The Bells. He chose it for his final exam at the Moscow Conservatory and conducted it just two weeks before his death.

Apart from its virtues as a brilliant piece of programming…this concert should be snapped up by Prokofiev lovers. It’s been a long time since we’ve had an electric performance of his seismic 1917 invocation Seven, they are Seven, and there’s no contemporary recording to my knowledge of the Op. 7 Poems…here we have the best of Russian ensembles, the Yurlov State Academic Chorus, a reminder of vintage Soviet-era quality

The Bells was a Svetlanov speciality…[and] Jurowski gets under its skin, drawing an intense, brooding performance…earning a disciplined response from the Yurlov State Academic Chorus. The soloists are very fine…Tatiana Pavlovskya’s ripe soprano is perfectly poised in the ‘Golden Bells’ movement