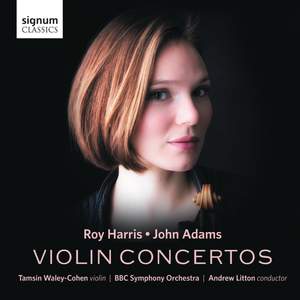 II. Chaconne "Body Through Which the Dream Flows"

Already considered by many to be a modern classic, John Adams 1993 Violin Concerto was described by the composer as having a ‘hypermelody’, in which the soloist plays longs phrases without stop for the duration of the 35 minute piece. Although composed in 1949, the first performance of Roy Harris’s Violin Concerto didn’t occur until 1984. Since then it has been championed for its “luminous orchestration and exalted tone”.

For this recording Tamsin Waley-Cohen is joined by the BBC Symphony Orchestra under American conductor Andrew Litton.

Her interpretation [of the Adams] is technically beyond reproach and musically imaginative. What makes this recording indispensible is the coupling...Harris’s Concerto is a major (re-)discovery, and Waley-Cohen outclasses Fulkerson’s pioneering version in every respect. Andrew Litton and the BBC Symphony provide superb, supple support.

Roy Harris may be the most all-American composer you have never heard of...Waley-Cohen handles [the Adams's] gruelling solo part with athleticism and conviction, and both pieces benefit from the punchy playing of the BBC Symphony Orchestra and insightful conducting of Andrew Litton.

It’s a very welcome work, with much to like, to be thrilled and moved by, and is given here with commitment and colour by all concerned.

There is some tremendous playing from Waley-Cohen … with impressive accuracy from both soloist and orchestra, a real rapport … This is a fabulous performance of a very fine concerto. These two concertos sit remarkably well together. The recording is excellent as are the booklet notes.

Tamsin Waley-Cohen brings the lyrical sweetness and breadth of tone Harris needs, while the sweeping vistas and exuberant rhythms are supplied by the BBC Symphony Orchestra and Andrew Litton.