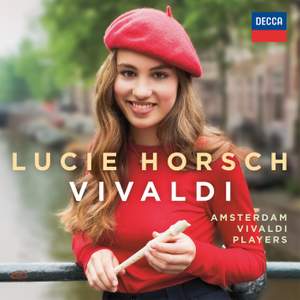 Fearsome virtuosity and superb technique…this is a disc to buy, and display in years to come as the start of a distinguished career — BBC Music Magazine, January 2017, 4 out of 5 stars More…

The Dutch recorder-player talks to Katherine about her debut disc on Decca.

Lucie Horsch is a brilliant young recorder virtuoso from Amsterdam. Still only 17, she began playing the recorder aged 5 winning numerous prizes and representing the Netherlands at Eurovision 2014 Young Musician of the Year in Cologne. In 2016 she was awarded the Concertgebouw Young Talent Award presented to her by Sir John Eliot Gardiner

For her debut DECCA album Lucie has chosen to record an all Vivaldi programme: “I love the music of Vivaldi” she writes, “it’s rhythmical, light, energetic and the slow movements are utterly beautiful”

Lucie is joined by the hand-picked Amsterdam Vivaldi Players led by Candida Thompson and including Gregor Horsch, Lucie’s father and principal cellist of the Royal Concertgebouw Orchestra

Lucie already tours extensively throughout Europe, including appearances at Janine Jansen’s International chamber Music Festival in Utrecht, as well as making her debut in Canada with the Manitoba Chamber Orchestra. She will perform a series of concerts to launch the album in the Netherlands in Fall 2016.

Fearsome virtuosity and superb technique…this is a disc to buy, and display in years to come as the start of a distinguished career

[Horsch] is very good, displaying a phenomenal technique right from RV443’s virtuoso opening movement; articulation is never short of immaculate and her control across the dynamic range is equally secure…a strong start to a recording career.