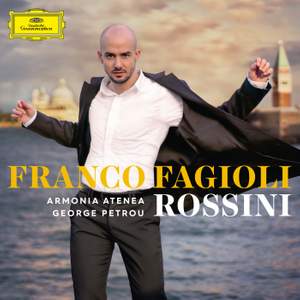 "Questi che a me presenta"

Katherine talks to the phenomenal Argentine countertenor about the composer's serious side, showcased on his debut disc on Deutsche Grammophon.

Franco Fagioli has taken the countertenor voice to a new heights, with a sound and technique that nobody thought were possible; he is the first countertenor to sign exclusively to the 'yellow label' in its 118-year history.

For his debut album on DG, Fagioli has chosen to focus on so-called "trouser roles" that confront the delightful confusion between voice and gender, particularly in Rossini’s rarely performed serious operas, with many male characters whose substantial roles were written for women rather than for castrati. But Rossini remained fascinated by the castrati and their "purity and wonderful flexibility; their profoundly penetrating accent”. For Franco Fagioli there is a special appeal to performing these roles which were written for the female voice out of necessity due to the dwindling supplies of castrati; therefore this album is so far the closest that we can get to the sound that Rossini had in mind and would have wished for this repertoire.

The exceptional bel canto technique which Fagioli has developed makes him the ideal choice for this repertoire; with his rich, colourful and at the same time incredibly agile voice, he paints a series of fascinating portraits of characters including Siveno from Demetrio e Polibio, and Arsace from Semiramide.

Franco Fagioli has already performed major roles on prestigious stages including the Royal Opera House, Covent Garden in London, Théâtre des Champs-Élysées in Paris, the Semperoper in Dresden and the Zürich Opera House. In the coming seasons he will be performing this Rossini programme in selected concerts and appear in opera houses such as Aix en Provence (Grand Théâtre de Provence), Paris (Opéra National), Madrid (Teatro Real) and Lille (Opéra de Lille), among others.

[Fagioli] certainly has a distinctive, plum-coloured voice, very mezzo-ish in timbre, ranging somewhere between Cecilia Bartoli and Ewa Podlés…he certainly throws himself into high notes with abandon – a white-knuckle ride on occasions

His voicee is of a fascinatingly ambiguous timbre, reminiscent of yesteryear's contraltos in its chesty resonance and with agility to match, and I very soon forgot all abtou the singer's gender. He phrases in long lines, often carrying over after a cadenze into the following phrase, and his embellishments are stylish and imaginative.

Fagioli’s technical skill is without doubt and he can fling off the most challenging coloratura with aplomb…challenging, slightly mad – and why not?

Franco Fagioli about taking over a woman's role