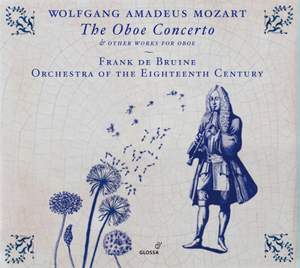 Mozart: Oboe Concerto and other works for oboe

Frank de Bruine has long been one of the most refined of period oboists; and his mellifluous tone and gracious phrasing (he never squawks or rasps) are agreeably heard in both the concerto and... — Gramophone Magazine, October 2016 More…

Following the death of Frans Brüggen in August 2014, the decision was taken by the Orchestra of the Eighteenth Century to continue touring the world, and inviting various guest conductors who have worked with the ensemble over the years, such as Daniel Reuss and Andrea Marcon, and indeed Kenneth Montgomery, who directs the orchestral pieces on this brand new recording for Glossa.

The first recorded result of the post-Brüggen era is this Mozart CD with a programme centred on the oboe, which has been devised by longstanding orchestra member, Frank de Bruine. Mozart has been central to the Orchestra’s music making and the composer made many friends with wind players – including oboists – and wrote abundantly for them. De Bruine, himself is the soloist in the C major Oboe Concerto (the original version of the Flute Concerto, KV 314) and is present in two chamber pieces, the F major Oboe Quartet, KV 370 and the D major Divertimento, KV 251. The CD closes with the concert aria, “Vorrei spiegarvi, oh Dio!”, KV 418 sung by Dutch soprano Lenneke Ruiten.

This new chapter in the recorded history of the Orchestra of the Eighteenth Century is crowned with an essay by scholar Clemens Romijn.

Frank de Bruine has long been one of the most refined of period oboists; and his mellifluous tone and gracious phrasing (he never squawks or rasps) are agreeably heard in both the concerto and the quartet – works conceived in a spirit of friendship, and sounding like it.

[Lenneke Ruiten] rises to D and E sharps with gleaming tone...De Bruine is a virtuosic and characterful soloist, especially in the lovely andantino from the rare Divertimento, K251.