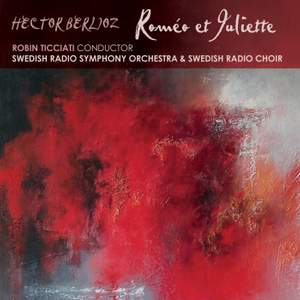 If freshness and vitality appeal more than sheer richness, try listening to this — BBC Music Magazine, November 2016, 5 out of 5 stars More…

Ticciati and the SRSO are joined by the Swedish Radio Choir, a phenomenal ensemble and one of the best large-scale choruses in Europe, alongside featured soloists Katija Dragojevic mezzo-soprano, Andrew Staples tenor and Alastair Miles bass.

Roméo et Juliette was considered a pinnacle of French Romanticism and a brilliant example of Berlioz's orchestral mastery. The work is one of the most original conceptions of the nineteenth century: deftly poised between symphony and stage drama.

Robin Ticciati fully communicates the range of Berlioz's imagination; he brings an innate understanding of the romanticism of the music and succeeds in delivering a performance that is brimming with color.

If freshness and vitality appeal more than sheer richness, try listening to this

orchestrally superb...The sound pictures are precise and subtle...Katija Dragojevic is a gorgeously warm mezzo, and Alastair Miles a stentorian bass in the final Serment de réconciliation, but a boxy acoustic underbalances the chorus.