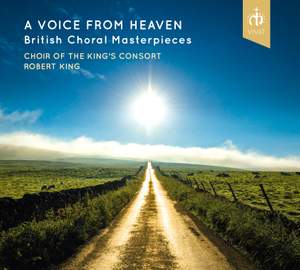 A Voice from Heaven

Impossible not to add to the praise that has greeted this beautifully performed collection...The settings are mournful but consolatory. — Sunday Times, 23rd October 2016 More…

Tavener: Take Him Earth For Cherishing

I heard a voice from Heaven

Hymnus Paradisi: V. I heard a voice from heaven

Songs of Farewell: Lord, let Me Know Mine End

Herbert Murrill: The Souls of the Righteous

A beautifully themed collection of fourteen of the finest unaccompanied British choral masterpieces of the last 125 years performed by award-winning Choir of The King’s Consort.

The collection is completed with three impressive single works: Parry’s valedictory ‘Lord, let me know mine end’, William Harris’s masterwork ‘Faire is the Heaven’, and a stunningly powerful recording of John Tavener’s ‘Song for Athene’, which sprang to global fame when performed at the funeral of Diana, Princess of Wales.

Recorded in the well-nigh perfect acoustic of St Jude’s Church, London, by the award-winning production team of David Hinitt and Adrian Peacock.

Impossible not to add to the praise that has greeted this beautifully performed collection...The settings are mournful but consolatory.

this album of unaccompanied British choral works shows the 28-strong Choir of the King Consort, especially known for baroque performance, in a rich, lushly romantic light.