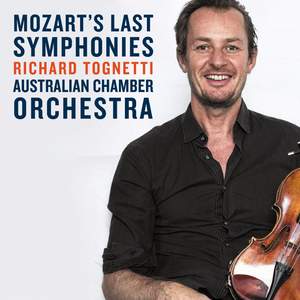 In a crowded market, this pair of discs of Mozart’s last three symphonies strands out, and will, I imagine, prove controversial…the opening bars of the Jupiter (No. 41) positively bark at you,... — BBC Music Magazine, Christmas 2016, 4 out of 5 stars More…

“One thing you get with Mozart, and no other composer comes close, is dancing on your own joy.” Richard Tognetti.

The Australian Chamber Orchestra, directed from the violin by Richard Tognetti, presents a triumphant account of Mozart’s three final symphonies.

This live recording captures the energy and vivacity of the performances given as part of the ACO’s 40th anniversary celebrations in 2015 – concerts that were described as ‘magnificent’ by The Sydney Morning Herald and ‘miraculous’ by the Daily Telegraph. The same program was previously performed by the ACO 26 years ago, when Richard Tognetti – newly appointed as Artistic Director – performed these three symphonies under the visionary baton of early music legend Frans Brüggen.

Since its establishment in November 1975, the Australian Chamber Orchestra has become renowned globally for its inspired programming, unrivalled virtuosity, energy and individuality, showcased through an extensive and ongoing program of international touring and recordings for many of the world’s top labels.

Composed over the course of just six weeks, these inspirational works represent the pinnacle of artistic achievement: from the sunny lyricism of the 39th, to the tragic cast of the 40th, to the inspired invention of the 41st – the ‘Jupiter’ – they form a mighty epitaph to the work of Mozart’s musical genius.

In a crowded market, this pair of discs of Mozart’s last three symphonies strands out, and will, I imagine, prove controversial…the opening bars of the Jupiter (No. 41) positively bark at you, and the harsh dissonances in the introduction to No. 39 have never before been as harsh as this. On the other hand, Tognetti slows down, regularly, before a lyrical subject and in general lets tempos ebb and flow in an unfashionable way

Not surprisingly, perhaps, his interpretations are rather raucous themselves, with urgent tempi, sinewy sonorities and an aggressively muscular approach to phrasing and articulation…the ACO play with gusto and admirable virtuosity

The approach is typically large-scale and imposing: this 21st-century fusion of modern instruments with period ideas creates a fullness of sound that sometimes belies the fact that it is a chamber orchestra...but which is always combined with a transparency and litheness that make it constantly engaging and worthwhile.