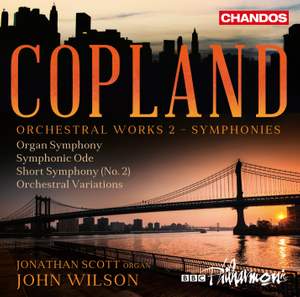 Copland: Symphony for organ and orchestra

Following a highly successful recording of Copland’s ballet music, John Wilson, a specialist in American music, and the BBC Philharmonic present the first volume of the composer’s complete symphonic output. This unique collection of vivid and energetic pieces highlights Copland’s personal, unorthodox compositional language. The mixture of works of austerity and tense excitement ranges widely, from the twenty Orchestral Variations on an original theme (originally written for piano) to the single-movement controversial Symphonic Ode, a rhythmically complex piece written in its original incarnation for a huge orchestra including eight horns and five trumpets.

The album features also the lesser-known Short Symphony (No. 2) and early Symphony for Organ and Orchestra, in which the solo instrument throughout is closely integrated with the music of the orchestra. The organ soloist is the young Jonathan Scott. Since a highly successful Gershwin concert at the Royal Albert Hall in 2014, he is increasingly acclaimed around the world for his performances of American music.

This album was recorded on SACD in the mythic Birmingham Symphony Hall.

Spiky, hard-edged music for a dynamic American society, driven with vivacity and excitement yet I doubt if it will make many appearances in my CD player.

Everything about the performances signals a conductor and an orchestra who really believe in the quality of the music they are performing. The BBC Philharmonic seems to relish Copland’s springy rhythms, long-limbed melodies and irrepressible invention, while Wilson manages to bring transparency and buoyancy to even the most massive climaxes.

This performance is technically superb, John Wilson’s BBC Philharmonic sounding…energised…Wilson’s brass are heroic in the closing stages, and the music’s lighter moments aren’t undersold. But the best work on this disc is the deceptively lightweight Short Symphony…transparently orchestrated, rhythmically fiendish and harmonically approachable, it gets a sharp, witty reading, Copland’s Stravinskian metre changes effortlessly handled.

This darkly ravishing second volume in John Wilson’s welcome Copland survey for Chandos delves into the nooks and crannies of his orchestral work to find riches aplenty…the high standard is maintained by the BBC Philharmonic throughout, evidenced in the richly textured and concentrated Orchestral Variations…the single-movement Symphonic Ode (1929, revised in 1955) is a thing of bold, bracing beauty played with spirited brio.