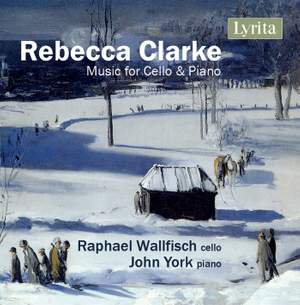 There’s a visionary grandeur to [the Rhapsody], a sonata in all but name. In comparison to the restless modality of her Viola Sonata. It’s not only case on a bigger canvas but is also harmonically... — BBC Music Magazine, September 2016, 4 out of 5 stars More…

Passacaglia on an Old English Tune

Initially studying violin at the Royal Academy of Music in London but withdrawn by her father when her harmony professor there proposed to her, she was thrown out of the family home in 1905 by her father when she criticised him for his philandering. She had to fend for herself, turning to composition (she was Stanford’s first female student) and the viola which she studied with the great Lionel Tertis. She excelled in both fields and was soon able to support herself. She quickly became a leading chamber music and orchestral violist, work ing with all the major figures in London, including Frank Bridge and Ralph Vaughan Williams, Alfred Cortot and Jacques Thibaud. Her concert work took her around the world, especially with the cellist May Mukle and the pianist Myra Hess, the brilliant duo for whom the 1923 Rhapsody was certainly conceived.

The Sonata, as a work for viola, has become familiar and much recorded in recent years. But the Rhapsody, which is an even larger work, has remained in the shadows. It is still circulating only in the composer’s rough manuscript which is both hard to read and full of alte rations. As a part of this recording project John York has prepared a performing version which Lyrita hopes to publish in 2017.

There’s a visionary grandeur to [the Rhapsody], a sonata in all but name. In comparison to the restless modality of her Viola Sonata. It’s not only case on a bigger canvas but is also harmonically more dissonant and ambiguous, and…this deeply committed reading outshines its forerunner

[Wallfisch plays the Sonata] with vindicatory zest. He embraces the opening’s impetuosity and the impish humour of the Ravelian third movement. But what serves him best of all is his full-bodied tone which, together [with] York’s delicate pianism, locks into the music’s poignancy…an affectionate, touching homage