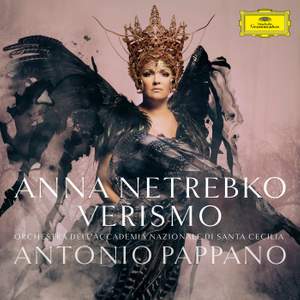 all sung with plenty of voice and abandon...when she settles into a long extract from Puccini’s Manon Lescaut, with tenor husband Yusif Eyvazov and Antonio Pappano conducting, the recital hits... — Financial Times, 26th August 2016, 4 out of 5 stars More…

The “Diva Assoluta del Mondo” (Opera News) is back, as you have never heard her before!

With VERISMO Anna Netrebko presents her long-awaited new studio album – the first in three years – displaying her remarkable vocal maturity and reaffirming her status as one of the leading sopranos of her generation.

For Anna Netrebko herself, it was the obvious next step; for her public it promises to be a revelation. The challenging verismo repertoire offers a fascinating portrait of Netrebko’s voice in its full maturity. Having reached the latest peak in an already sensational career, the soprano continues her vocal and artistic development in logical fashion, illuminating the stylistic and psychological complexities of verismo with her own special intensity and powers of expression.

Set to be one of the most important and anticipated classical releases of 2016.

VERISMO features Netrebko in the greatest, most irresistible hits of the Grand Italian repertoire of the fading 19th Century, with arias by Puccini, Leoncavallo, Ponchielli, Boito, Giordano, Catalani.

Showcasing brand new interpretations of some of the greatest and most popular opera arias of all time.

Anna Netrebko has reached the heart of the rich, mature dramatic repertoire that allows her to showcase the sheer beauty, endless, wide range of colours and emotion in combination with her distinct and beloved timbre that sets her apart from any other artist, past or present. In many ways this album is a self-discovery for this unique artist, and is destined to reach Anna’s widest fan-base.

Verismo at the turn of the last century introduced "real life" experience to opera and left behind the romantic approach of Belcanto. Netrebko’s recent performances of Verdi’s “Macbeth” and “Il Trovatore" but also her role debut of "Manon Lescaut" in March 2014 in Rome, have shown that Netrebko is able to combine the most beautiful sound production with the harsh, sometimes brutal and scary reality of those heroines she is awaking to life for us.

all sung with plenty of voice and abandon...when she settles into a long extract from Puccini’s Manon Lescaut, with tenor husband Yusif Eyvazov and Antonio Pappano conducting, the recital hits an impressively impassioned peak

[We get] as sense of a real person engaged in a real drama, of Manon and Des Grieux in the direst of straits, as Netrebko and her tenor (and husband), Yusif Eyvazov, tug at the heart strings. His voice is pleasingly grainy…[and Netrebko] sounds in good voice, too: darker, richer in tone than previously on disc and full across the range.

There is no denying, however, her ability to convey in sound the sensual beauty of these largely tragic heroines (only Turandot survives at the end), as well as the great weight of sadness that most of them carry within them. And in the final 20 minutes of the recital—devoted to the fourth act of Manon Lescaut—she achieves a moving individuality of expression alongside her solid partner (and offstage husband), the Azerbaijani tenor Yusif Eyvazov.

Everything’s sung with no-holds-barred abandon and emotional commitment...there’s strength and sweetness aplenty, aided by idiomatic detailed and often superbly delicate support from Pappano and his Roman orchestra...Like Cleopatra, Netrebko ‘makes hungry where she most satisfies’, and I can’t wait to see where she goes next with this repertoire.

[Manon Lescaut], along with the Riddle Scene from Turandot, is Netrebko close to her best. she could declaim the text more incisively, but there is no denying the glory of her voice, more “fleshy” in timbre and exciting at the top, or its suitability for Puccini’s Tosca and Butterfly. Pappano’s deluxe accompaniments are sumptuously played.

Extracts from 10 operas show her voice reaching an exciting maturity, its increased weight matched by even more gleam, fizz and expressive projection. She has yet to sing most of these roles on stage, but inhabits them convincingly...Pappano is, as ever, the ideal supportive conductor, and the orchestra plays as if it loves Netrebko’s every note.

her rich, dark chocolate and red wine tone is the main sell here, along with her satisfyingly growly low register and wall-shaking (even through your home speakers) top notes...Pappano and the Orchestra dell’Accademia Nazionale di Santa Cecilia also go full pelt, swaggering, moody and full-blooded throughout.

The results are nothing short of magnificent. In familiar excerpts by Cilea, Giordani, Puccini and more, Netrebko deploys her increasingly dark and weighty vocal tone, along with the expressive fervor that has always been a hallmark, to produce readings that excite and delight the listener.