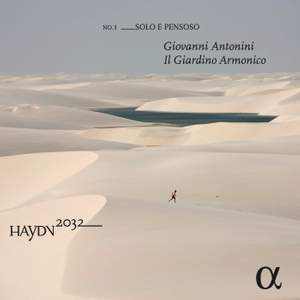 As in the previous volumes, the orchestral playing is breathtaking in its accuracy - the sort of Haydn playing you dream of…this may well become the period-instrument Haydn cycle by which all... — Gramophone Magazine, May 2017 More…

Haydn: Symphony No. 64 in A major 'Tempora Mutantur'

Haydn: Symphony No. 4 in D major

Looking ahead to the 300th anniversary of the birth of Haydn in 2032, the Joseph Haydn Foundation of Basel has joined forces with the Alpha Classics label to record all of the composer’s 107 symphonies. This ambitious project is placed under the artistic direction of Giovanni Antonini, who now presents the third volume, after two previous issues that attracted great attention and received numerous awards, including the Echo Klassik Prize 2015 for the ‘best orchestral recording’ of the year.

Since he sees the music of Haydn as ‘a kaleidoscope of human emotions’, Giovanni Antonini has decided to approach the symphonies not chronologically, but thematically; the theme here is Haydn the philosopher. The Italian conductor has chosen in each of the programmes to make connections between the symphonies and other works. For this volume, he calls on the magnificent soprano Francesca Aspromonte to perform the famous aria ‘Solo e pensoso’.

As in the previous volumes, the orchestral playing is breathtaking in its accuracy - the sort of Haydn playing you dream of…this may well become the period-instrument Haydn cycle by which all others are measured.