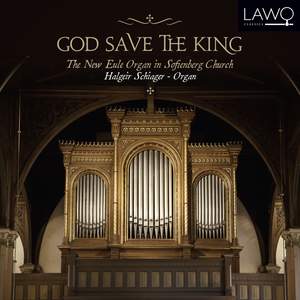 God Save the King

There is an increasing understanding of the relation between instrument and choice of repertoire and that there is no universal instrument capable of reproducing equally well the music of all epochs. Although the instrument in Sofienberg Church functions superbly for Bach, French symphonic and more contemporary music, performances of German-inspired nineteenth-century organ music achieve a tone quality that can only be realized on historic or historically inspired instruments from this time. That there are very few new instruments in this style makes the organ unique.

The repertoire on this CD is German organ music published over a period of almost 50 years, from 1833 to 1879. There are early Romantic composers who were also influenced by the Classical era, and composers from the centre of musical Romanticism. They all composed for organs with mechanical action, which gave way to pneumatic key action in the late nineteenth century. All the works were written by composers who are forgotten today (with the exception of Hesse), but who were regarded as important in their own time. And, typical for the time in which they lived, they were composers who performed their own works. These recorded works are fantasies and variations on melodies that are familiar in many countries.