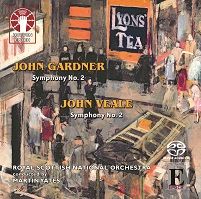 Veale: Symphony No. 2 in D minor

Martin Yates and the Royal Scottish National Orchestra make a striking discovery by coupling the second symphonies of John Gardner and John Veale, works dating from 1984-85 and 1965 respectively. Gardner was a well-loved figure in his time, as both teacher and composer, writing an enormous amount of music. The Second Symphony espouses a traditional treatment of the orchestra together with a personal lyricism, which will appeal to all who have taken Malcolm Arnold to heart. John Veale’s career as a composer spanned half a century, including notable film music, but was interrupted by a long period when his lyricism was deemed critically unacceptable. The four-movement Second Symphony is a glorious personal statement, from the sadness of the opening cor anglais solo (later developed in the powerful slow movement) to the punchy, rhythmic writing and bold scoring, in which one is tempted to find elements of his sympathy for the American symphonies of the 1940s.

All tracks available in stereo and multi-channel,

This Hybrid CD can be played on any standard CD player