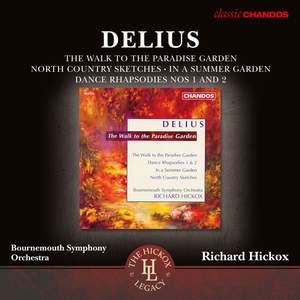 A Village Romeo and Juliet: The Walk to the Paradise Garden

No. 1. Autumn, the Wind Soughs in the Trees

No. 4. The March of the Spring

Recorded in Bournemouth in 1994, this album, highly recommended by the Penguin Guide a year later, is now re-issued at ‘classic Chandos’ price.

The Bournemouth Symphony Orchestra playing under the baton of Richard Hickox, Delius’s palette of colours shines through once again. Hickox was indeed a sensitive and flexible Delian and the Bournemouth Symphony Orchestra responded passionately to him from the start: their collaboration began with famous performances of the first ever complete cycle of Vaughan Williams’s symphonies in London. Especially in ‘The Walk to the Paradise Garden’ – a highlight here – the collection demonstrates the glittering qualities of Delius’s enchanting musical world, which evokes an atmosphere of serene pleasure in nature.