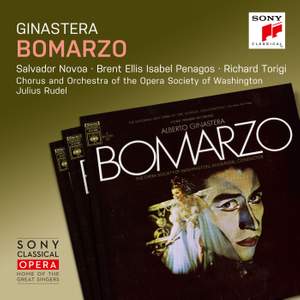 Chorus and Orchestra of the Opera Society of Washington, Julius Rudel

Act I: Scene 1: Song of the Shepherd Boy

Act I: Scene 1: Presentiment of Death

Act I: Scene 1: Interludium I

Act I: Scene 2: Stage music for the Children's Games

Act I: Scene 2: The Father's Arioso

Act I: Scene 2: Pantomime of the Rose-crowned Skeleton

Act I: Scene 3: Ritual of the Magic Circle

Act I: Scene 3: The Omen of the Peacocks

Act I: Scene 4: Paean to Florence

Act I: Scene 4: Recapitulation of the Paean

Act I: Scene 5: Death of Girolamo

Act I: Scene 6: Procession of the Ducal Consecration

Act I: Scene 6: The Spectre

Act I: Scene 7: Galliard and Masquerade

Act I: Scene 8: Appearance of the Demon

Act II: Scene 9: Madrigal "In the Elixir of Love"

Act II: Scene 14: Magic Round of the Alchemists

One of those two continents is South America. Alberto Ginastera, Argentina’s leading classical composer, would have been 100 in 2016, and Sony marks the centenary with the first CD release of his opera BOMARZO. It tells the anguished true story of a deformed 16th-century Italian duke who, spurned in love and consumed by jealousy, demanded the creation of a series of fantastical sculptures for his “park of monsters”. The role, created for a young, up-and-coming Spanish tenor named Plácido Domingo, is sung on this long-unavailable recording by the Mexican tenor (and Ginastera specialist) Salvador Novoa. Based on the 1967 world-premiere production in Washington DC, the set is conducted by Julius Rudel.