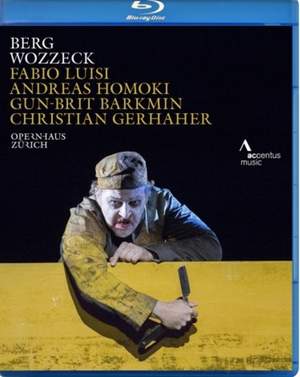 While the Lieder-like beauty of Gerhaher’s singing Is matchless – he can act too – this is no star vehicle. It is ensemble work of the highest order…the relationships are brilliantly drawn, and... — BBC Music Magazine, Christmas 2016, 5 out of 5 stars More…

The soldier Wozzeck flits through a world that he is unable to decipher. The Doctor torments him with absurd medical experiments; the Captain humiliates and ridicules him. And Wozzeck’s lover, Marie, with whom he has a child, cuckolds him with the Drum Major. Wozzeck becomes a murderer, stabbing Marie to death.

Georg Büchner’s drama fragment, on which Alban Berg based his first opera, is an unflinching case study of social injustice and human suffering. But it is also a grotesque piece that thrives on exaggeration – and in which only a fine line separates the unfathomable from the ridiculous. Accordingly, director Andreas Homoki forgoes all realism. His nightmarishly radical production is inspired by puppet theatre. Christian Gerhaher’s role début as Wozzeck can only be described as sensational: his capacity for vocal and dramatic subtlety is simply breath‐taking. At the rostrum of the Philharmonia Zurich, Fabio Luisi explores both the expressionistic and the more intimate aspects, reminiscent of chamber music, in Berg’s seminal score.

While the Lieder-like beauty of Gerhaher’s singing Is matchless – he can act too – this is no star vehicle. It is ensemble work of the highest order…the relationships are brilliantly drawn, and the murder of Marie is more shocking for its surrealism. The string and woodwind solos are incisive, and the blossoming of the orchestral interludes as directed by Luisi is almost indecently lovely

This is a finely honed production that follows its premise to an absurdist conclusion with slick theatricality and dispassionate zeal...All sentimentalism is banished here. So, largely, is the opera’s plea for justice and compassion. It is left to Christian Gerhaher’s Wozzeck to fight that battle, which he does with formidable diction and great lyrical beauty, offering, where he can, a still centre in the tumult.

This is a triumph – gripping and moving. The performance of Christian Gerhaher is outstanding, but there is also much else to admire and recommend.

Something of a triumph for all concerned.