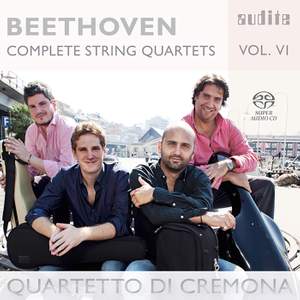 [The Cremona] are well up to their usual standard in the exhilarating performance for the A major Quartet Op. 18 No. 5, with its wonderfully peremptory opening and its general air of a youthful... — BBC Music Magazine, January 2017, 2 out of 5 stars More…

Once more, an early and a late work provide insight into Beethoven’s startling development. Both pieces reveal how Beethoven incorporated folk music into his own works – in all other aspects, the styles of these two string quartets could not be more different.

Early and late - with Beethoven this always implies developing questions and expanding compositional ideas. In the case of the works recorded here, the A major Quartet from the Op. 18 set and the B-flat major Quartet, Op. 130, the focus is on folk music and its integration into art music: a recurring, central subject for the composers of "Viennese Classicism" which also guaranteed general accessibility to their music. The variations on a simple theme in the Andante of the Quartet Op. 18 No. 5 represent such a case of looking towards popular music, as also does the "Alla danza tedesca" from the late Quartet Op. 130, where the rhythm and character of the good old German dance is alienated to such an extent that it seems to appear as a damaged recollection, more than as an actual dance.

In all other aspects, however, the styles of these two string quartets could not be more different. "Who would not remember the enthusiasm created by his first symphonies, his sonatas, his quartets", a contemporary wrote not long after Beethoven's death. "All music lovers were delighted to find, so soon after

Mozart's death, a man emerge who promised to replace the sorely missed. But alas, albeit gradually,though increasingly, he departed from his initial path, insisted on cutting a new one, and finally went astray." This "going astray" is today considered the most fascinating late oeuvre in musical history, to be experienced here in passionate and painstaking interpretations by the Quartetto di Cremona as part of their recording of the complete Beethoven Quartets.

[The Cremona] are well up to their usual standard in the exhilarating performance for the A major Quartet Op. 18 No. 5, with its wonderfully peremptory opening and its general air of a youthful genius in confident possessions of his unique powers

Op 130 is a masterpiece — tough, poignant, charming, even a touch sentimental. It’s played with freshness and immediacy.