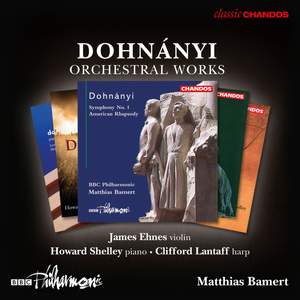 Dohnányi: The Veil of Pierrette, Op. 18

Ernst von Dohnányi was for many years a little-known and unjustly neglected composer.

Chandos’ series of recordings of his orchestral works, performed by the BBC Philharmonic under Matthias Bamert, with a distinguished roster of soloists, significantly increased his public profile, and is now regarded as benchmarks for the repertoire.

This box set, at Classic Chandos price, features his most famous orchestral works and concertos, with contributions from such prestigious artists as James Ehnes, Howard Shelley, and Clifford Lantaff; a must have for fans of Dohnányi as well as for curious newcomers to the music of this masterly composer.

An economy set presenting attractive and for the most part rarely heard music with performance, recording and documentation value uncompromised.