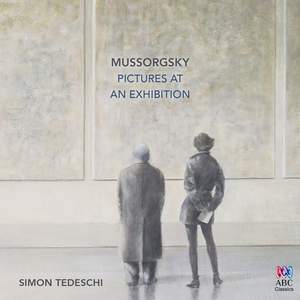 V. Ballet of the Chicks in Their Shells

Tchaikovsky: Album for the Young, Op. 39

No. 5 March of the Wooden Soldiers

No. 8 The Doll’s Funeral

No. 13 The Peasant Plays the Accordion

No. 24 The Organ-Grinder Sings

Musical interpretations of the paintings at an exhibition held in Hartmann's memory are interspersed by five Promenades, in which Mussorgsky portrays himself moving from picture to picture. The narrative of the work encompasses richly vivid, imaginative and varied musical depictions of the paintings, from 'Tuileries' - in which we hear children chattering and fighting in a Parisian garden - to a depiction of a crude Polish farm wagon ('Bydlo') to the quicksilver 'Ballet of the Chicks in their Shells.'

“When I was asked by ABC to record this work, I could scarcely wait to sink my teeth into it. Like any iconic piece, it traverses the centuries and transfixes us with its pertinence to the struggles, conflicts and fixations we face today.” – Simon Tedeschi

Pictures at an Exhibition is accompanied on this album by the surprising, delightful and innocent Album for the Young by Tchaikovsky.

Simon Tedeschi has performed in major concert halls throughout Australia, Europe, North America and Asia, and for world leaders including George W. Bush, Vladimir Putin, Nelson Mandela, and the Dalai Lama. His wide-ranging discography includes acclaimed recordings of concertos by Grieg, Tchaikovsky and Mozart, and solo albums Gershwin and Me, Gershwin: Take Two, and Tender Earth. He also played the hands of acclaimed pianist David Helfgott for the Oscar-winning film Shine.