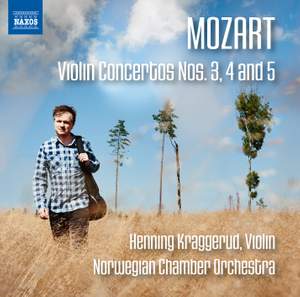 The orchestral textures are lightly and cleanly delineated, and the recorded sound has enough reverberation to give warmth without compromising clarity…in the Fourth Concerto, there’s a lovely... — BBC Music Magazine, September 2016, 3 out of 5 stars More…

I. Allegro (cadenza by H. Kraggerud)

I. Allegro (cadenza by H. Kraggerud)

The violinist talks to David about his new Mozart recording, and his views on the relationship between composer and performance.

Mozart wrote his Violin Concertos in 1775 while still living in his home town of Salzburg and in service to Prince-Archbishop Hieronymus Colloredo. Mozart had already toured internationally and found his parochial environment restricting, but as ever he rose above circumstances to create sublime and thrillingly unconventional masterpieces filled with wit and charm. The finely sustained melodic expression of each concerto’s slow centre provides the perfect foil for inventive sparkle in outer movements that include a cheeky reference to the opera Il re pastore in K. 216, and an exotic ‘Turkish’ moment in the finale of K. 219.

An artist of exquisite musicianship, Henning Kraggerud is invited time and again to join many of the world’s most prestigious orchestras, including the Philharmonia, Hallé, Danish National Symphony, the Cincinnati, Baltimore, Toronto and Vancouver symphony orchestras and the Hong Kong Philharmonic. He has performed with the LA Philharmonic at the Hollywood Bowl and twice at the BBC Proms in London. In his native Norway, he is Artistic Director of Arctic Philharmonic Chamber Orchestra. Kraggerud’s discography includes many recordings on the Naxos label, including Grieg’s Three Sonatas, arranged for violin and chamber orchestra by Henning Kraggerud and Bernt Simen Lund (8573137).

The orchestral textures are lightly and cleanly delineated, and the recorded sound has enough reverberation to give warmth without compromising clarity…in the Fourth Concerto, there’s a lovely singing character to the central Andante, Kraggerud producing a variety of tone which matches the changing intensity of the line…he plays his own cadenzas, which are stylish in the best sense, and show off his technique, but don’t outstay their welcome.

The admixture of Nordic coolness and a proactive approach to the scores is a potent one, and enables the ‘character’ moments…to make their mark. Slow movements are not freighted with any Romantic lingering and so remain chaste without becoming frigid. Kraggerud provides his own cadenzas throughout, which demonstrate both his dexterity and his sympathy for the idiom

Here's a Naxos recording of standard classical repertoire that would make any full-price label proud...The performances are light and energetic. Kraggerud’s tone is eloquent and beautiful, marrying richness in the low notes with sweetness at the top, and he plays his own long, sparky cadenzas.

Kraggerud’s zestful love of these works shines from every bar. This is an indispensable bargain - roll on Vol. 2