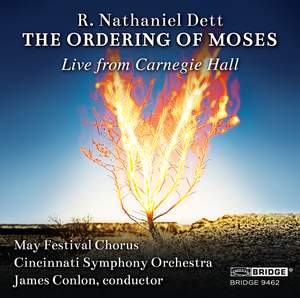 Dett: The Ordering of Moses

No. 9, And When Moses Smote the Water (Live)

No. 10, March of the Israelites Through the Red Sea (Live)

No. 12, And When They Reached the Other Shore (Live)

In 1937, Cincinnati's May Festival gave the world premiere of R. Nathaniel Dett's oratorio, "The Ordering of Moses", a 'Biblical Folk Scene' composed in 1932. The event was broadcast live to the nation by NBC radio. The present recording captures a thrilling 2014 concert of Dett's magnum opus, performed by four stellar vocal soloists, the May Festival Chorus, and the Cincinnati Symphony Orchestra, conducted by James Conlon.