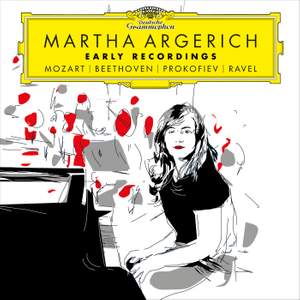 The difficulty in writing about the piano playing of Martha Argerich is that it is now, and always has been, so relentlessly good...Her Mozart bubbles with the freshness and effervescence of... — Gramophone Magazine, August 2016 More…

Martha Argerich’s exhilarating early recordings, released here for the first time, include sonatas by Mozart and Beethoven that appear nowhere else in her discography; Prokofiev’s Third Sonata is also a recording première. This set displaying the young virtuoso includes her first recordings of Ravel’s Gaspard and his Sonatine, as well as Prokofiev Seventh Sonata, full of mystery and verve. They show her to be an eloquent and imaginative artist at the age of 18, already at the peak of her abilities. This release documents some of the radio recordings she made for North German (NDR) and West German Radio (WDR) in 1960 and 1967 and is released in time for her 75th birthday celebration on 5th June 2016.

The difficulty in writing about the piano playing of Martha Argerich is that it is now, and always has been, so relentlessly good...Her Mozart bubbles with the freshness and effervescence of a Bernini fountain in the midday sun...Argerich’s command of Prokofiev is quite unlike anyone else’s, his compatriots included.

The interpretations of that, the Sonatine and Prokofiev’s Seventh Sonata, may be those of a young pianist without any technical fears, but they are also very clearly those of a supreme musician in the making.

This 1960 Gaspard is fleeter, more mercurial than her subsequent DG studio version and is a must-hear, as are Prokofiev’s third (blistering) and seventh sonatas. Much of this material has been available unofficially before, but never with (mono) mastertape quality sound or such fine documentation