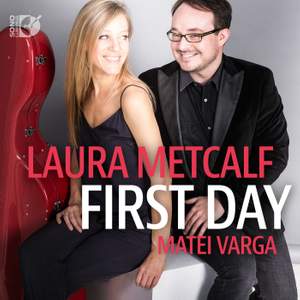 Cellist Laura Metcalf, noted for her "gorgeous cello legatos" (Washington Post) and her “sensitive, melodic touch” (BlogCritics Magazine) enjoys an active career as a soloist, chamber musician, orchestral musician, and teacher. She is the cellist of acclaimed string quintet Sybarite5 who won the 2011 Concert Artists Guild Victor Elmaleh Competition, and has performed sold-out concerts at the Library of Congress, Lincoln Center and many other venues worldwide. Sybarite5 made its Carnegie Hall debut at Zankel Hall in 2012, and their album Disturb the Silence recently reached the Top Ten on the Billboard Charts. In 2011 Laura was appointed to the cello-percussion quartet Break of Reality, with whom she has toured extensively. Laura also performs regularly as a solo recitalist; First Day is Laura’s debut album!

Pianist Matei Varga’s artistry has garnered superlative reviews from critics around the world, who have found his performances “magical” (Süddeutsche Zeitung), as well as “colorful, vivacious [and] engaging” (Le Diapason). A top prizewinner at the Maria Canals and George Enescu piano competitions, Mr. Varga has appeared as a soloist and recitalist in many of the world’s leading concert halls, among them Carnegie Hall and Alice Tully Hall, Konzerthaus (Berlin), the Auditorium du Louvre and Salle Gaveau (Paris). He is a graduate of Mannes College of Music, where he studied with Pavlina Dokovska.

First Day represents many firsts, beginnings and youthful sentiments. The title is taken from the phrase "paths of the first day" from the final track on the album, Les chemins de l'amour by Francis Poulenc. The pianist Matei Varga was one of Laura’s first friends and musical partners when they both moved to New York City in 2004. They played together a great deal in those early years, and after a decade of pursuing independent musical projects, were thrilled to collaborate again for this recording. The eight works on this album are ones to which both feel deeply connected, and which they believe complement each other to form a whole that is both exuberant and reflective.