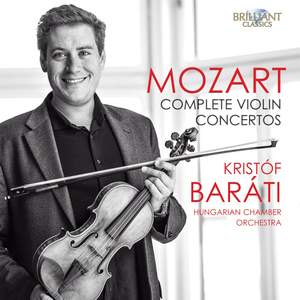 [I was] won over by the characterful projection of Baráti’s playing and the responsiveness of his Hungarian players…Baráti is businesslike and urban in slow movements. These have an ideal singing... — Gramophone Magazine, August 2016 More…

Mozart: Rondo for Violin and Orchestra in B flat, K269

Hungarian violinist Kristóf Baráti is recognised as one of the leading violinists of his generation. He plays with the Philharmonia Orchestra, Mariinsky, WDR Sinfonieorchester, London Philharmonic, and conductors like Gergiev, Dutoit, Jurowski, Masur, Pletnev, Fischer, Temirkanov.

“..Baráti is out of the top drawer. With intensity of sound, unbridled athleticism and searing leaps into the stratosphere which send a tingle down the spine” (Gramophone), “Masterful, probing, meditative, it rang with a rare sense of authenticity, and almost majestic scope” (Washington Post).

“He is on the order of magnitude greater than any other violinist I’ve encountered in at least 10 years” (Fanfare on the Beethoven violin sonatas, with Klára Würtz, piano).

On this 2 CD set Baráti plays the complete works for violin and orchestra of Mozart: masterful, strong, alternating great vitality and tenderness, vigour and beauty. He himself conducts the excellent Hungarian Chamber Orchestra.

[I was] won over by the characterful projection of Baráti’s playing and the responsiveness of his Hungarian players…Baráti is businesslike and urban in slow movements. These have an ideal singing tone but he doesn’t pine for beauty elsewhere: there’s just occasionally a gruff edge to the 1703 ‘Lady Harmsworth’ Strad that provides added colour to his playing in faster music