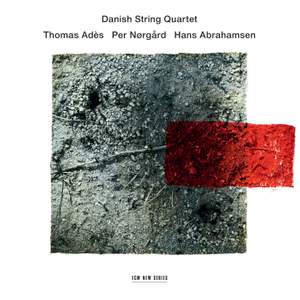 The Danish are remarkable, as ever – capable of intense blend, extreme dynamic variation (in which they seem glued together), perfect intonation even on harmonics, and constant vitality and flow — Gramophone Magazine, June 2016 More…

The Danish String Quartet, one of the most widely-acclaimed chamber groups of the present moment, makes its ECM debut playing a programme of British and Danish music: Thomas Adès’s Arcadiana (composed 1994), Per Nørgård’s Quartetto Breve (1952), and Hans Abrahamsen’s 10 Preludes (1973).

The pieces were all written when the respective composers were each barely into their 20s, and have a freshness and intensity vividly conveyed in the DSQ’s interpretations. “Arcadia has no national boundaries”, writes Paul Griffiths in the liner notes. “We may feel that the precision of nuance, the warm and intelligent closeness of voices and the command of form these Danish musicians bring to Abrahamsen as to Nørgård comes from some common heritage or sympathy, and yet the same fine qualities shine through their performance of the Adès piece.”

The album was recorded in May 2015 at Reitstadel Neumarkt and produced by Manfred Eicher.

The Danish are remarkable, as ever – capable of intense blend, extreme dynamic variation (in which they seem glued together), perfect intonation even on harmonics, and constant vitality and flow

It’s an exacting programme requiring grace, grit and clarity and the Danish players sound terrific – lithe and glassy in the Abrahamsen, richer in the Nørgard, able to capture the picturesque watery shimmer of the Adès but also the slime and murk below the surface. It’s a sophisticated performance.