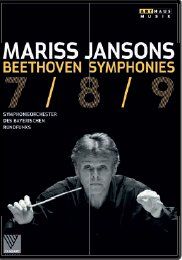 In his first six symphonies Beethoven had set out to raise the genre from being mere upper class entertainment to an artistic expression of ideas. The technical innovations that can be observed most clearly in the Third, Fifth and Sixth, always involved an emphasis on aspects of the content, as indicated by the titles of the Third and Sixth – “Eroica” and “Pastoral”. The fact that the Fifth does not bear a title authorised by Beethoven does not indicate that it was supposed to be understood as “absolute” music focused merely on the structuring of intervals and rhythms. In his Seventh (1812) and Eighth (1813) Symphonies, however, Beethoven does come close to such “absolute” music. And the Ninth (1824) – it will always stand for itself.