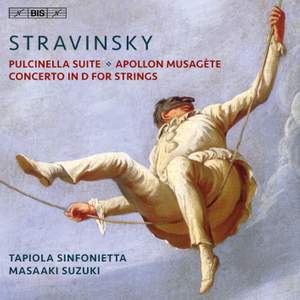 There is much to admire here, with flowing lines throughout, giving elegance to the lilting sections of Pulchinella and imbuing much of Apollon Musagète with a suitable stylishness. The latter’s... — BBC Music Magazine, September 2016 More…

Tableau I: Prologue: The Birth of Apollo

Masaaki Suzuki is firmly established as a leading authority on the works of Bach, both in his capacity as director of the Bach Collegium Japan and as an organist and harpsichordist. In recent years he has also been appearing in front of eminent orchestras worldwide, however, conducting repertoire as diverse as Britten, Fauré or Mahler. For his first recording of 20th century repertoire, Suzuki has chosen to collaborate with the acclaimed Tapiola Sinfonietta in an all-Stravinsky programme. The disc begins with the music for Pulcinella – here in the concert suite devised by the composer – which Stravinsky later described as ‘the epiphany through which the whole of my later work became possible’. Pulcinella was commissioned in 1919 by the Ballets Russes, for which Stravinsky had already written The Firebird, Petrushka and The Rite of Spring. For this adaptation of an early eighteenth-century commedia dell'arte libretto, he based his score on existing music, initially ascribed to Pergolesi although material by other baroque composers is also included. Stravinsky’s approach is never that of a faithful transcriber, however: in Pulcinella the material is slanted harmonically, rhythmically and texturally in a manner reminiscent of cubism – and it was indeed Picasso who provided the decor and costumes for the ballet's first performance. The neoclassical (or neobaroque) spirit remained a vital part of Stravinsky’s compositional armoury for a long time, and also informs the other two works presented here. The formal design of Concerto in D, composed some 25 years after Pulcinella, pays homage to the baroque concerti grossi of Vivaldi and Bach, while the score for the ballet Apollon musagète (also known as Apollo) contains references to French music from the 17th- and 18th-century – but there are also echoes of Tchaikovskian lushness in the work which is richly scored for a string orchestra which is often subdivided, and with many distinctions between solo and tutti lines.

There is much to admire here, with flowing lines throughout, giving elegance to the lilting sections of Pulchinella and imbuing much of Apollon Musagète with a suitable stylishness. The latter’s ‘Pas de deux’ is especially affecting, while Suzuki and the Tapiola Sifonietta make the Arioso of the Concerto in D an attractively unassuming passage of sustained reflection

Suzuki is a time traveller who restricts string vibrato more than some will like. In Apollo he delights in refreshing Stravinsky’s unexpected chords with a distinctly scrunchy edge, while his nicely animated Pulcinella tends to be voiced à l’ancienne

A nicely recorded and performed disc

There’s a baroque sensibility to their performance of the suite from Pulcinella... Suzuki makes each note count as the individual lines combine and compete, perhaps at the expense of the music’s natural, classical lyricism. And so, while it’s crisp and pleasingly emphatic, there’s a sense that the performance is keeping a lid on the music’s exuberance.