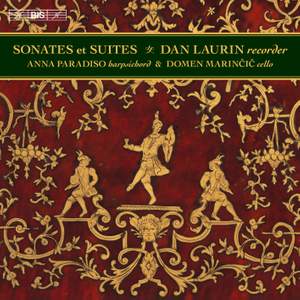 Laurin enriches the Lentement of the [Philidor] with expressive vibrato but it is Philidor’s lively syncopated fugues that give most pleasure. The Blavet is a virtuoso work – the variations in... — Gramophone Magazine, June 2016 More…

Dieupart: Recorder Suite No.1 in A major

Suite No. 1 in A Major: II. Allemande

Suite No. 1 in A Major: III. Courante

Suite No. 1 in A Major: IV. Sarabande

Since 1987, Dan Laurin has released some thirty titles on BIS. On his latest disc, Sonates et Suites he has chosen to visit France at an exciting point in time. In the early 18th century, when all of the sonatas and suites included here were composed, the system of censorship that ensured that nothing was printed without royal permission was beginning to crumble, at least in the field of music. One contributing factor was ‘le Concert Spirituel’, a series of privately arranged public concerts which was inaugurated in 1725, and which meant nothing less than an aesthetic revolution for the attending Parisians. Sometimes performances of Italian music in particular led to actual brawls between advocates of the French and the Italian styles. On this expansive disc, Laurin and his fellow musicians Anna Paradiso on harpsichord and cellist Domen Marinčič illustrate this process in sound, with a quintessentially French suite by Charles Dieupart rubbing shoulders with an italianate 'Suite-Sonate' by Jacques-Martin Hotteterre. The disc also presents Dan Laurin with the perfect opportunity to perform on his own instrument the most iconic piece of French music from this period. Prepare yourself for Marin Marais' Folies d'Espagne like you have never heard them before, in Laurin's own arrangement for solo recorder!

Laurin enriches the Lentement of the [Philidor] with expressive vibrato but it is Philidor’s lively syncopated fugues that give most pleasure. The Blavet is a virtuoso work – the variations in the final movement are definitely not for amateurs – and all the better for being paired with harpsichord alone. Anna Paradiso’s accompaniments are unfailingly sympathetic and stylish