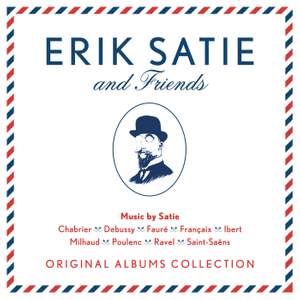 Satie: Gymnopédies for Orchestra: No. 2

A box set of captivatingly idiosyncratic piano pieces, songs and ballets by Satie and his friends such as Debussy, Ravel and Poulenc.

Features famous and popular pieces such as Vexation, a forerunner of Minimalism or the simple, haunting Gymnopédies (1888) and Gnossiennes (1890) who have become universally familiar from their use in TV adverts and movies.

Five of the discs for the first time on CD.

Plus a 1950 historic recording (CD1) of Francis Poulenc playing not only his own piano pieces but also those of his friend Erik Satie.

Erik Satie, that endearing French (though actually half-Scottish) revolutionary, has been credited with starting European musical history all over again. In 2016 the musical world will celebrate his 150th birthday. Sony Classical is marking the occasion with a 13-CD box set of his captivatingly idiosyncratic piano pieces, songs and ballets, which places the composer in his unique cultural context – the astonishing artistic effervescence of early 20th-century Paris.

Satie was a famous eccentric, who wore only grey velvet suits, ate only white food and founded his own one-member church. He supported himself (barely) by playing at cabarets. It was there he met Claude Debussy, who became a close friend and fell under Satie’s influence. Those cabaret evenings can be detected in Satie’s own charming songs, performed in this collection by some of the finest French singers of the 20th century: baritone Pierre Bernac, accompanied by Francis Poulenc, and soprano Régine Crespin, accompanied by Philippe Entremont. Satie also left his mark on the music of Maurice Ravel and the young composers known as Les Six, including Poulenc. Debussy, Ravel and Poulenc are all featured in this set along with Satie. Indeed CD 1 is a historic 1950 recording of Francis Poulenc playing not only his own piano pieces but also those of his friend Erik Satie.

Satie also befriended enfant terrible Jean Cocteau after the poet-artist was smitten with the composer’s Three Pieces in the Shape of a Pear – a work included twice in this collection in performances by pianists Robert and Gaby Casadesus (a historic mono recording as well as a modern stereo one). Other typically oddball Satie titles include Bureaucratic Sonatina, The Trap of Medusa, The Woman Who Talks Too Much, Veritable Flabby Preludes (for a Dog), Automatic Descriptions and Desiccated Embryos – all heard here in authoritative performances by French pianists Philippe Entremont and Daniel Varsano. In 1917 Satie collaborated with Cocteau and Pablo Picasso on the ballet Parade for Serge Diaghilev’s Ballets Russes, resulting in a scandal that led to Satie spending eight days in jails for being a “cultural anarchist”. After the premiere, Cocteau overheard a woman say, “If I’d known it was going to be as silly as that, I’d have brought the kids.” Satie’s disarmingly surrealistic score for Parade, which includes a typewriter, a foghorn and milk bottles, makes two appearances in the new Sony set, with Philippe Entremont conducting the Royal Philharmonic Orchestra in 1970 and a historic recording from 1949 with the Houston Symphony conducted by ballet specialist Efrem Kurtz.

Satie was largely forgotten after his death in 1925. But he enjoyed a renaissance in the 1960s and was elevated to cult status with the imprimatur of avant-garde composer John Cage, who put on concerts of his works and declared him indispensable to the development of contemporary music. Pieces such as Vexations – a page of music with an instruction to be played 840 times – are considered forerunners of Minimalism. Satie’s most popular piano pieces, such as the simple, haunting Gymnopédies (1888) and Gnossiennes (1890) – which evoke classical ancient Greece through the simplicity, repetition and modal harmonies – have become universally familiar from their use in TV adverts and movies. Debussy’s orchestrations of the Gymnopédies are also found in this collection.

Each recording in this exceptional new set of 13 CDs – featuring facsimile LP-sleeves – comes from the best source. Five of these discs, including a bonus of historic mono recordings, are essentially appearing on CD for the first time.