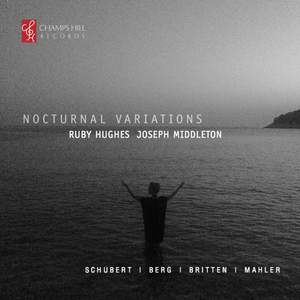 Britten: This way to the tomb

Britten: At the mid hour of night

I have always been fascinated by the various moods of night, from the astonishing drama of storms and sunsets to the tranquillity of darkness: a time for contemplation, meditation, sleep and dreams.

Night has at times evoked darker, more foreboding thoughts and philosophical questions concerning death and existence. Alone at night, the state of mind can be awestruck and frightening under the dark canopy of the universe. At other times it feels safe and calm.

These four composers (Schubert, Mahler, Berg and Britten) have been favourites of mine from a very young age. I love their melodies and modulations, their subtlety and passion as well as their genius for setting and enhancing profoundly moving words. They all composed so lyrically for the voice. Their night songs have at times an otherworldly sense of mystery, as in for example Mahler’s Urlicht, Schubert’s Im Abendrot and Abendstern, Berg’s Warm die Lüfte and Britten’s Um Mitternacht. Their songs also work brilliantly when programmed together, revealing influences such as Schubert’s on Mahler, and Schubert’s and Berg’s on Britten.

Alban Berg’s songs achieve a wonderful blend of his modernist musical language with all he inherited from the romantics (i.e. Schubert through to Mahler). Britten too has the power to combine ancient and modern influences to superb effect.

A BBC New Generation artist in 2011–2013, Ruby Hughes held a Borletti Buitoni Trust award, was shortlisted for a 2014 Royal Philharmonic society Music award, and was winner of the first prize and audience prize at the 2009 London Handel competition.

Ruby Hughes's singing is exceptional - light and delicate yet true.

A truly outstanding disc from this talented young duo