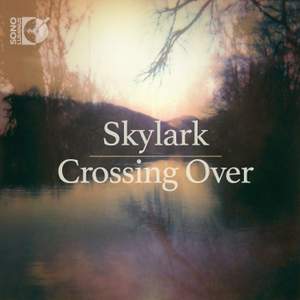 No. 1. Butterfly Dreams: A Pleasant Hallucination

No. 3. Haiku: A Butterfly Floating in my Hand

No. 4. Haiku: Dissolves into a Cloud of Chaos

No. 5. Haiku: Something Sinister Gives Way

No. 6. The Butterfly: My Most Horrifying Nightmare

No. 7. Butterfly Song: A Vision from Childhood Comforts Me

No. 8. Butterfly Dreams: A Dream Recurs

No. 1. The Last Invocation

No. 2. The Unknown Region

Crossing Over is comprised of compositions that depict the dream state at the end of life. Featuring unique voices in choral composition from around the world, and including several world premiere recordings, Crossing Over takes audiences on a musical and emotional journey that taps deeply into the human spirit and illuminate the mystery of the end of mortal life and the possibilities of a life beyond.

The album features several well-known contemporary composers, as well as compositional voices that are just gaining notoriety. Skylark commemorates British composer Sir John Tavener with the first US commercial recording of Butterfly Dreams, an 8-movement dream-state piece composed in 2003. American composers are prominently featured as well, with a rare recording of William Schuman’s Carols of Death, based on the poetry of Walt Whitman. Notably, the album features two young American compositional voices, with the debut recording of Robert Vuichard’s Heliocentric Meditation based on the poetry of John Donne, and a recording of Elegy by Daniel Elder, based on the tune Taps, played at United States military funerals. Skylark also share stunning and seldom-heard music from the Icelandic choral tradition, including the first US recording of Requiem by Jón Leifs and an inspiring ancient psalm setting by contemporary Icelandic composer Anna Thorvaldsdottir. Thorvaldsdottir, recently named as the prestigious New York Philharmonic Kravis Emerging Composer, traveled from Iceland to work with Skylark during the sessions.

The Skylark Vocal Ensemble is a chamber choir of professional soloists and music educators from across the United States. Formed in 2011 under the direction of Matthew Guard, Skylark has been described as “a gem… soloists who come together to create a dynamic and inspiring whole.” Skylark performs innovative programmes that help reinforce the intent of the composers to communicate truths about the human condition. A not-for-profit entity, Skylark also performs educational outreach programmes with students across the United States during their concert tours.