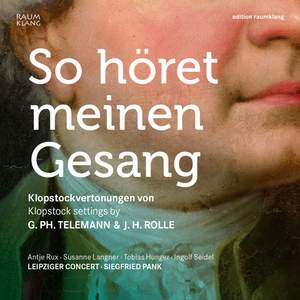 So höret meinen Gesang (So hear my voice)

Klopstock settings by Telemann and Rolle

Goethe revered him and raved about him in his Werther – the poet Friedrich Gottlieb Klopstock not only filled poets with enthusiasm, but has also inspired musicians from G. P. Telemann through Gustav Mahler to the present day. Klopstock realized his ideal of antique poetry in the epic poem The Messiah, which is written throughout in hexameters. For Georg Philipp Telemann, his poetry posed a new challenge; Telemann tried his hand several times on Klopstock’s works, the most famous being the two settings, recorded here, of the first and tenth cantos of the Messiah. Telemann sensitively translated the mood and the form of the text into music, searching for new ways that contrasted with the realization of the usual cantata or oratorio forms. This major work is complemented by the cantata Komm, Geist des Herrn, composed in 1759, and by Klopstock’s musical elegy David and Jonathan, which was set by the Magdeburg Music Director Johann Heinrich Rolle. The Leipziger Concert, under the direction of Siegfried Pank, delights with a very empathic musical approach to Klopstock, Telemann and Rolle.