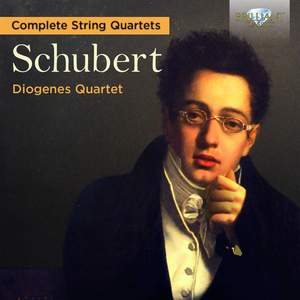 Schubert: String Quartet No. 5 in B flat major, D68

Schubert: Overture D 8a in C minor for string quartet

Schubert: String Quartet No. 3 in B flat major, D36

Since 2012, the German ensemble Diogenes Quartet have devoted themselves to recording all of Schubert’s music for string quartet. Already released as individual volumes to high acclaim, they are now available to purchase together, setting Schubert’s later masterpieces alongside his earlier works and revealing the genius he was at such a young age. Additionally, the quartet have worked with Christian Starke, an expert in Schubert’s music, who has sensitively completed two of the composer’s fragments, allowing the listener to appreciate fully the astonishing potential these short pieces contain.

While the four late quartets have always been considered shining examples of Schubert’s mastery of the genre, his earlier works for string quartet – written as a young teenager – have at times been overlooked in the past. They were clearly intended for a familiar, domestic setting rather than the concert hall, and the Diogenes Quartet’s sensitive rendition draws the listener in, recreating the intimate setting and drawing out the sense of lyricism already present in Schubert’s lines.

The Quartet were highly praised by Fanfare for their ‘immaculate execution’, complemented by ‘genuine emotional engagement and real feeling for Schubert’s unique modes and moods of musical expression’ in Volume 2, with the reviewer Jerry Dubins stating that once complete, this recording of Schubert’s string quartets would be the one to have. This quality boxset certainly attests to that claim.