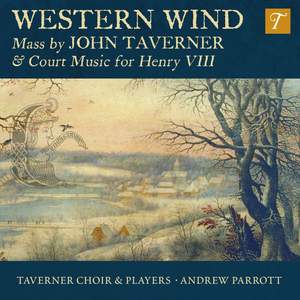 The Western Wynde Mass nicely contrasts with The Tallis Scholars’ recording, being incisive and brisk where Peter Phillips’s reading is smoother and more leisurely. Parrott is perhaps more persuasive... — Gramophone Magazine, May 2016 More…

Taverner: The western wynde: I. Gloria

anon.: O Blessed Lord, How May This Be

Cornysh the elder: Yow and I and Amyas

Andrew Parrott and his Taverner Choir & Players turn to music of their namesake alongside works by his contemporaneous King Henry VIII, an exceptionally musical monarch, and two composers of the previous generation, William Cornysh and Hugh Ashton.

With Taverner's Western wind mass as its corner-stone, this recording takes its lead from the unashamedly secular character of that work and ventures beyond the chapel door to explore the parallel world of courtly vernacular song and instrumental music.

The Western Wynde Mass nicely contrasts with The Tallis Scholars’ recording, being incisive and brisk where Peter Phillips’s reading is smoother and more leisurely. Parrott is perhaps more persuasive in conveying its pacing...the sound recording successively juggles a wide range of distributions, from harpsichord to choir, with no apparent discontinuity.

Taverner was evidently the first Englishman to use secular music as a liturgical source, and it gives the piece a breezy, buoyant quality that comes through here with fetching immediacy.