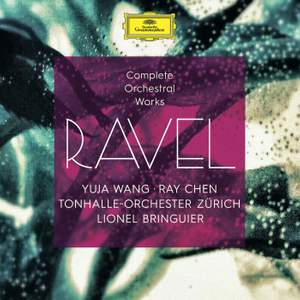 On 8 April, Deutsche Grammophon is releasing a 4-CD box set of Ravel’s complete orchestral works and solo concertos, performed by the Tonhalle Orchester Zürich under the baton of Lionel Bringuier. The new set represents something of a rarity in its completeness and in having largely been recorded live. The soloists are pianist Yuja Wang and violinist Ray Chen, while this expansion of its CD repertoire with Ravel’s music marks the orchestra’s first recording project under Lionel Bringuier. The choice of composer was a carefully-considered artistic decision, according to the conductor: “For my first recordings with the Tonhalle Orchester Zürich I’ve opted for Ravel. We all know his Daphnis et Chloé, Boléro and La Valse. A complete cycle allows us to get to know some lesser-known works as well.” This is Deutsche Grammophon’s first collaboration with the renowned Zurich ensemble.

When it comes to the works common to all sets – Pavane pour un infante defunte, Rapsodie espagnole, La valse, Valses nobles et sentimentales…Bringuier’s ear for style and mood, shaping and phrasing, together with the orchestra’s ready response, just about gives this set the edge over its competitors, but it’s a close-run thing

Bringuier has been immersed in Ravel’s music since he conducted Boléro at the age of 15, and here he wallows in the instrumental colours of one of classical music’s great orchestrators...The full score of Daphnis et Chloé — with wordless chorus — crowns the set, with a Danse générale that leaves you breathless.