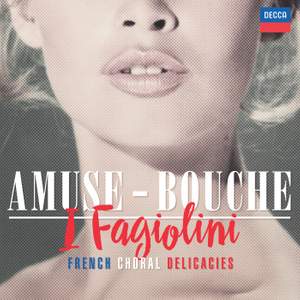 As pianist and singer, Markland offers the most idiomatic performance. She plays Satie’s Gnossiennes 4, 5 and 6 beautifully and sings the top line of Milhaud’s Deux Poèmes and Poulenc’s Un soir... — BBC Music Magazine, June 2016, 3 out of 5 stars More…

Chief among them is the first recording of an 18-minute humorous homage to French cuisine by Jean Françaix. His Ode à la Gastronomie is an affectionate parody of sage advice from the great 19th century guide to French food and dining, La Physiologie du gout (1825), by Brillat-Savarin.

According to the composer’s son, Jacques, this particularly rich parody involving onomatopoeic word-play (kitchen noises) and plenty of gastronomic puns, requires a ‘fondu exceptionnel’, the perfect blend of voices, which he says I Fagiolini delivers par excellence. Conductor Robert Hollingworth says: “it’s a joy to sing, and a meal in itself to learn.”

Alongside Françaix’s amuse-oreille is Jean-Yves Daniel-Lesur’s 12-voice masterpiece, Les Cantique Des Cantiques. Composed within two years of the Françaix, it portrays the erotically charged Biblical Song of Songs as a dialogue between Christ and the Church. In a ravishing and symphonic kaleidoscope of colours Daniel-Lesur’s constantly changing combination of voices transforms the Old Testament verses into a profound Christian meditation.

These two large-scale works are separated by a collection of smaller pieces designed as a series of palette-cleaning sorbets between the main courses. Francis Poulenc struggled for nearly 20 years to set poems by his friend, the surrealist, Paul Éluard, employing dramatic harmonic shifts to reflect emotions that veer violently between extremes to find sublime moments of exquisite tenderness.

There is also a nod to the 150th anniversary of the birth of Eric Satie as the pianist, Anna Markland, plays three of Satie’s six gentle Gnossiennes. Winner of the BBC’s Young Musician of the Year in 1982 at the age of 17, Anna Markland joined I Fagiolini four years later as a soprano and she takes centre stage as pianist in the second world premiere on the album, playing one of her favourite pieces in a specially commissioned vocalised version by a former member of I Fagiolini, Roderick Williams, now one of the UK’s leading baritones.

He has taken words by Baudelaire and Rimbaud and set them within the reflective and moving middle movement of Ravel’s Piano Concerto in G.

For the group’s Director, Robert Hollingworth (celebrating his 50th birthday this year), this recording is a long held ambition. Of all languages, he finds French the most beautiful to sing in and says there is a world of wonders in the 20th Century French choral repertoire. “I adore it. It feels as much a part of me as any Monteverdi madrigal. The sensuality of the language, the shifting sands of harmony; it feels very chaleureux and something I Fagiolini has long sung and adored.”

As pianist and singer, Markland offers the most idiomatic performance. She plays Satie’s Gnossiennes 4, 5 and 6 beautifully and sings the top line of Milhaud’s Deux Poèmes and Poulenc’s Un soir de neige with elegance and integrity

the collection is the very best kind of musical pleasure, and one rather more substantial and enduring than the title might suggest…I Fagiolini bring all the madrigalian clarity and responsive, soloistic singing of their early music performances to this contemporary repertoire…it's in keeping with Hollingworth and his agile, chameleon-like group that…we get something entirely fresh and unexpected, a recording that's a bit sexy, a bit silly and absolutely, unmissably superb

Hollingworth’s vocal group I Fagiolini is best known for Renaissance music, but on Amuse-Bouche they venture confidently into early and mid-20th-century French repertoire .